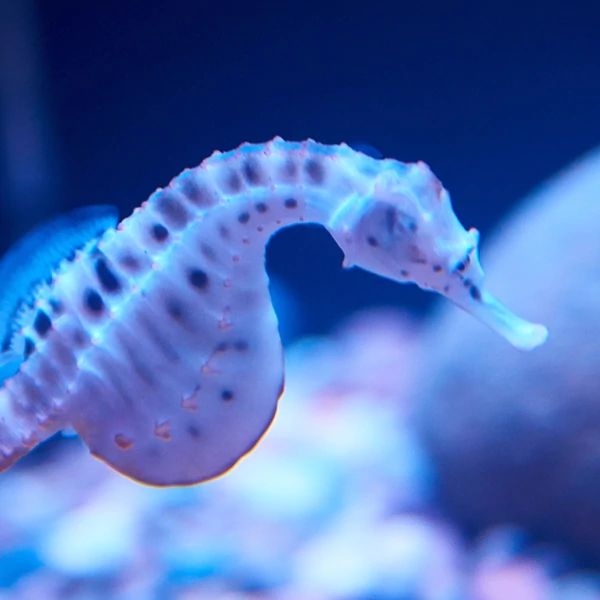 With a head like a horse, snout like an aardvark and belly pouch like a kangaroo, seahorses are anything but ordinary. These animals are quite unique and have many fascinating features from their eyes to their fins!

Seahorses can move their eyes in two different directions at the same time! This allows them to look for food with one eye and look-out for predators with the other. This is an important feature since seahorses have basic stomachs and need to spend most of their day eating.

Seahorses have a long, straw-like snout to suck in their food. They open their mouths so quick that it works almost like a vacuum. This snout characteristic is how they got their Latin name Syngnathidae. It comes from the Greek words meaning “fused jaws.”

Seahorses are known for being one of the best dads in the animal kingdom. The males all have a kangaroo-like pouch called a brood pouch. When he is ready to mate, he fills this pouch with water to attract a female. After a courtship dance, the female will deposit her eggs into the pouch and the male will fertilize them. The male will then carry the eggs, incubate them and eventually give birth!

A baby seahorse is called a “fry.” When the time is right for the babies to be born, the males will bend their bodies back and forth until a tiny seahorse pops out of the pouch. He will continue to squeeze and bend until all the babies are born. Some species can have just a few babies, while others can have over 1,000 at a time!

Seahorses swim by using a long fin on their back and smaller fins on the left and right sides of their head. These fins beat at rates of 30-70 times per second! This is a similar speed to a hummingbird’s wings. But instead of flying, the fast fins help to steer them around their tricky habitat. Seahorses may have fast fins, but their upright posture slows their speed. Unlike most other fish, seahorses do not have scales. Instead they have hard bony plates that help them stay upright when swimming.

Seahorses live in shallow and weedy areas, often where the current is strong. Seahorses are not the best swimmers… so their tail helps them hold onto the grasses and corals in their habitat. Sometimes they even hang on to each other so they do not get swept away!

A seahorse’s tail might look rounded, but it is actually a square shape. The flat edge of their tail gives them a better grip and keeps their tail from rotating in the waves. Researchers believe that this design allows the seahorse to be stronger and to save energy. Scientists are also looking into how this design could help with prosthetics for people.