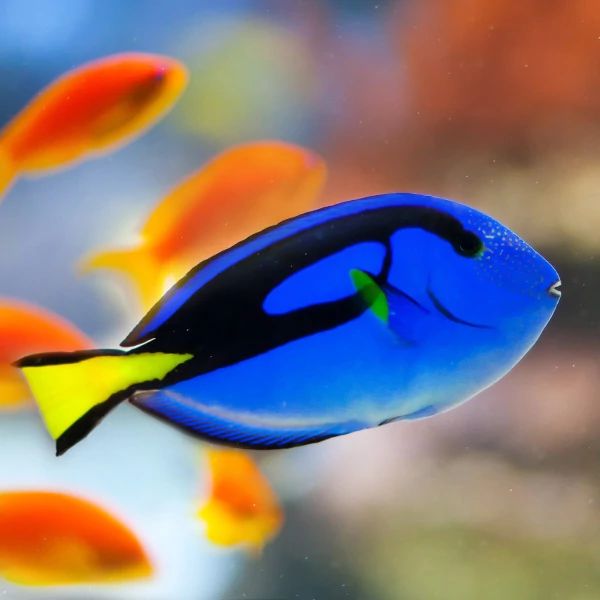 There are more than 32,000 species of fish known in the world today. What defines an animal as a “fish”? Although fish share many general characteristics, some species are exceptions.

To confuse things further, many animals that have the term “fish” in their names (starfish, cuttlefish, crawfish, etc.) are not fish at all! Without getting too detailed, let’s try to figure out what makes a “fish”, a “fish.”

Fish can be found in all types of water. Most species will live only in either saltwater or freshwater, but some species (salmon, freshwater eels, and some sharks) can move between the two. Some fish, such as the lungfish, can even survive for periods of time when their habitat dries up. Other fish such as mudskippers and rockskippers spend most of their days out of water, but stay close to the water’s edge to avoid predators and drying out.

Fish are found in a variety of water temperatures as well. Icefish live in the coldest environment - salt water that is a chilly 28 degrees Fahrenheit. (salt water doesn’t freeze at 32 degrees like fresh water does). At the opposite end of the temperature scale are the desert pupfish, which live in fresh water that can exceed 100 degrees Fahrenheit. Regardless of the water temperature, all fish are considered cold blooded, because they are unable to maintain a constant body temperature independent of their environment.

Fish are covered with a protective layer of scales. There are several types of scales: cosmoid (lungfish), ctenoid/cycloid (majority of bony fish), ganoid (gars, sturgeons, bowfin, and birchirs) and placoid (sharks and rays). In some fish, the scales are very tiny or completely absent.

In order to breathe, fish have gills that absorb oxygen from the water and release carbon dioxide back into the water. The gills are structured to have a high surface area. Blood flows through the gills. As water passes over the gills, oxygen and carbon dioxide are exchanged between blood and water. (In some fish, such as the lungfish, gills are so small that they do not provide oxygen to the fish; these fish have lungs.)

Gills also help fish control the levels of sodium, potassium and chloride in their bodies.

Fish have fins to propel themselves through the water. In most bony fish, the fins consist of bony spines or soft rays that are connected by thin flesh.

In sharks and rays, fins are solid in structure.

Sea robins and gurnards have modified spines on their pectoral fins which are used to “walk” across the bottom and also help stir up food out of the sand.

Stonefish, lionfish, rockfish and catfish use the sharp spines of their fins as a defensive mechanism. At the base of their spines are glands which produce toxins that can cause severe pain and even death should the spine enter the skin of an attacking predator.

In order to stay afloat in the water, most fish have a swim bladder. This balloon-like organ is filled with gasses such as nitrogen, oxygen, and carbon dioxide.

In fish that are called physoclists, the swim bladder is completely closed. All gasses for the swim bladder are taken from or returned to fish’s blood via specialized glands and tiny blood vessels.

Many species of fish that don’t have a swim bladder and spend most of their time resting on the bottom, or have other adaptations that help them maintain buoyancy.

There is no doubt that the most colorful varieties of fish live in saltwater. Almost every color of the spectrum can be found on various marine fish. Not only do the colors differ greatly between marine fish species, but so do the patterns. The combination of colors and patterns might help the fish blend into their colorful surroundings to hide from predators or to catch their next meal. The different colors and patterns may help fish identify other fish that belong to the same species. In some fish that are very aggressive and territorial, the juveniles look very different than the adults. This allows the juveniles to live in the same area without being recognized.