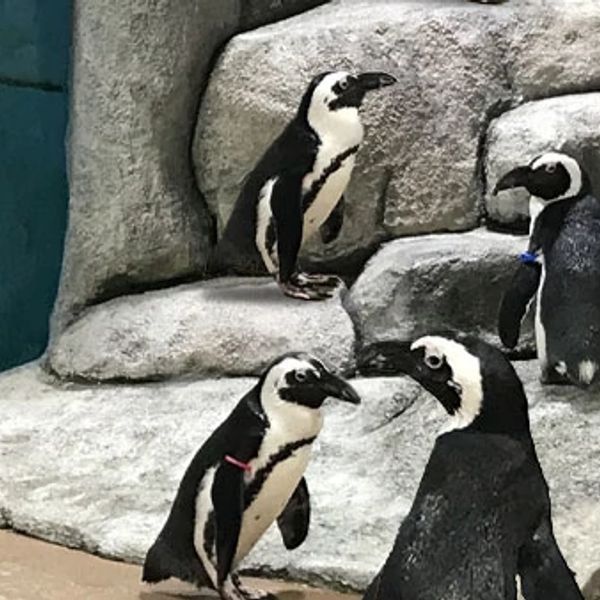 Newport, KY - April 25 is World Penguin Day and Newport Aquarium has plenty of reasons to celebrate. The internationally recognized day is meant to call attention to the plight of penguins around the world, many of which are endangered or threatened. This year’s World Penguin Day coincides with two important milestones at the aquarium: the relaunch of the warm-weather African Penguin Encounters, which generate funds for penguin conservation, and the hatching of a new baby King Penguin chick in the cold-weather Penguin Palooza habitat.

King penguin mom, Dumas, and dad, Indy welcomed their new chick to the family in late February. The family can now be seen by guests in Penguin Palooza. The adorable chick is easy to spot with its fuzzy feathered appearance. Newport Aquarium Biologist Geneve Darnell is part of the team that cares for the penguins every day. “It just warms my heart to see the success of our breeding program, a great sign of how happy and healthy the birds are,” said Darnell. “The chick’s mom was born here back in 2006 so, in a way, we’re grandparents!” The chick’s hatching is a success for the Association of Zoos and Aquarium’s Species Survival Plan breeding program. Newport Aquarium works closely with other AZA accredited zoos and aquariums on various conservation efforts including supporting cold-weather penguins.

Meanwhile, the warm-weather African Penguins are enjoying new adventures in their renovated and expanded habitat. Guests on the newly relaunched Penguin Encounter will feel like they’re taking a trip to South Africa as they meet a colony of African Penguin ambassador animals. They’ll have a chance to touch the birds to feel their thick coat of waterproof feathers while learning about the animals and their natural habitat. The experience generates funds for the conservation of African Penguin populations in the wild which are under threat from man-made problems like warming oceans and shrinking habitats.

Visitors to the aquarium are invited to learn more about penguins throughout World Penguin Day on April 25 including a chance to hear from the biologists that care for them. For more information, to plan your own Penguin Encounter or to get tickets visit NewportAquarium.com.