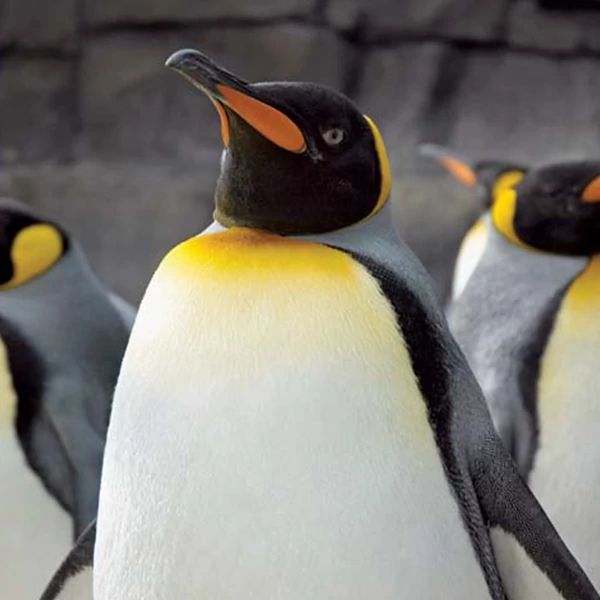 Imagine a group of highly sociable birds that abandoned flight millions of years ago and that now spend up to 75 percent of their lives in water. That description can only be given to the penguins. There are 18 species of penguins on earth and they all live south of the equator. The largest is the Emperor penguin, which stands almost four feet tall while the Little Blue Penguin stands only about 16 inches tall.

Penguins are primarily black and white, although some species have small tufts of colorful plumage that accent their heads. The black back and white front pattern on a penguin’s body is know as “counter-shading” and is critical to a penguin’s survival.

Although penguins are flightless birds and look comical as they waddle on land, they display both agility and grace when swimming. A penguin’s wings are small, sturdy and streamlined. With just a few flaps, these wings send a penguin “flying” through the water. Some penguins can speed up to 15 miles per hour underwater.

Penguins have several characteristics that help them below the surface. Unlike flying birds, the bones of penguins are solid and dense. That makes them strong, not very buoyant, and helps them dive deep underwater.

Because water easily pulls heat away from a body, a penguin must be able to insulate itself. Dense and oily feathers, up to 70 per square inch, overlap and form a waterproof barrier. A layer of blubber below the penguin’s feathers and skin also helps keep the penguin warm. Special blood flow patterns in the feet of penguin reduce heat loss.

Penguins feed entirely on aquatic animals -- crustaceans, fish and squid. The types of food consumed will vary among penguin species and will also change over the year as the availability of certain foods changes. Penguins chase their food underwater, and upon catching it, will swallow it whole.

All penguin species reproduce on land. Most will build nests, but some penguin species will hold an egg on top of their feet to protect it from the deadly cold. Parents will take turns incubating the egg and guarding the nest. This is done so that each penguin has the chance to go to sea to feed.

About two weeks after the penguin chick hatches, it is large enough to be left alone by both parents. This allows both parents to search for food at sea, and bring back enough for the rapidly growing chick.

At Newport Aquarium, the cold weather species of penguins you’ll discover include the King, Gentoo, Macaroni and Chinstrap penguins. You can see and learn more about all these species at our Penguin Palooza exhibit.

Penguins from South Africa prefer much warmer temperatures than their cold-weather cousins and because of this, they are housed separately. Although our warm climate penguins are not part of the Penguin Palooza exhibit, the Newport Aquarium offers the opportunity for guests to purchase a one-of-a-kind hand-on experience with these amazing birds through a Penguin Encounter.

Take a journey halfway across the world to Cape Town, South Africa where you’ll step right into the habitat of a colony of nearly a dozen African Penguins. Learn all about these amazing penguin ambassadors and their natural environment as you watch them waddle, call, preen and play just inches away from you. Spots are limited – purchase your exclusive Penguin Encounter tickets today! 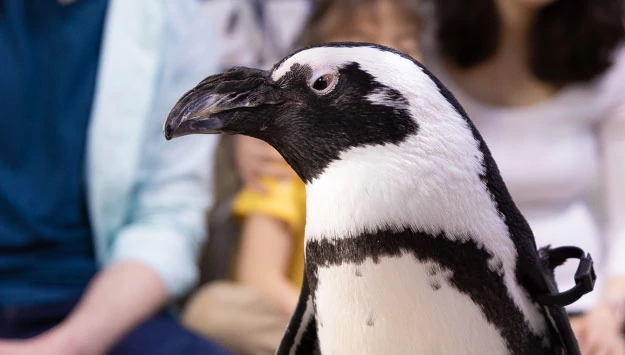 Thanks For Supporting Penguins!

Your Penguin Encounter participation helps support the animals in our care and to support our conservation partner SANCCOB (the Southern African Foundation for the Conservation of Coastal Birds). SANCCOB’s primary objective is to reverse the decline of seabird populations through the rescue, rehabilitation and release of ill, injured, abandoned and oiled seabirds – especially endangered species like the African Penguin.